The Pineapple Express has come and is now on it's way out. As expected it took our power down at the house. The picture above is our clubhouse that is powered by generator so we have someplace to go to use the kitchen or keep warm. This storm took out the wifi in the clubhouse (now back on) and our phones at the house are out. Cellphones seem to be working. I woke up between 3 and 4AM and I don't think I've ever heard or been in such a windstorm. So far I've heard that there were gusts that reached 67mph. No word when our power will be up.

I heard one television weatherman last night say that a warm Pacific Ocean was amplifying the effects of the Pineapple Express. Maybe hurricanes will start hitting the West Coast in the future.

I'm a little late in reporting this fact. October was the hottest October on record. Maybe I should just wait for November's numbers to come in. This has become a monthly post that I just keep repeating. I thinking of creating a template and substitute whatever month I need to use. I do find it interesting that the fact 2014 is almost certain to be the hottest year on record more news outlets are actually reporting on it. But I actually search for this information so I'm not sure your average citizen is receiving the word. I wonder what people in the eastern part of the United States thinks about these records. 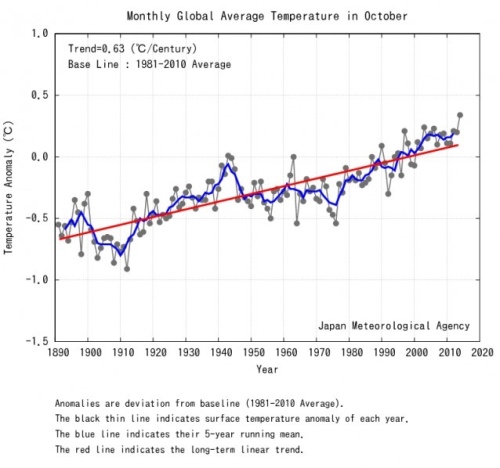 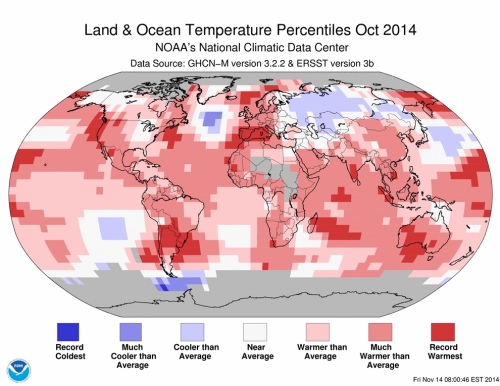 Looking at the map you can see how warm the ocean areas have been. NOAA explains:

The global oceans were the warmest on record for October, with a temperature that averaged 0.62°C (1.12°F) higher than the 20th century average. This marks the sixth month in a row (beginning in May 2014) that the global ocean temperature broke its monthly temperature record.

The warmer Northern Pacific Ocean might explain why we are getting good amounts of rain in California at this time. It's seem to be a warm rain.

The current reading of CO2 in the atmosphere, according to the Keeling Curve website, is 398.67 ppm. It began it's inevitable rise near the beginning of October. It will reach 400 ppm sooner and stay above that level longer this year. Remember that 350 ppm is thought to be the safe level. 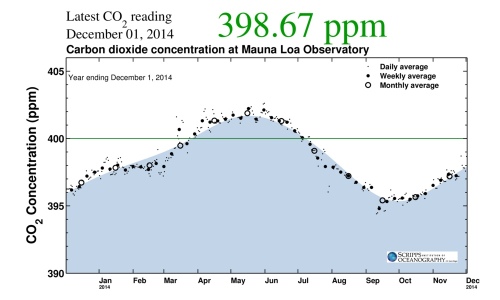 OK! Hurricane Ana is no longer a hurricane but:

Environment Canada is warning southeast winds are expected to reach speeds of up to 70 km/h tonight mainly over exposed coastal areas north of Nanaimo and Sechelt, and up to 90 km/h over Haida Gwaii and the Central Coast

“There will likely be heavy rainfall associated with the system and rainfall amounts of 50 to 75 mm are possible for tonight into Tuesday,” said the warning.

All this will be happening Monday night and this Tuesday morning.

Strange thing is, I can't find that happening before. Remnants of typhoons have hit Canada's West Coast but not hurricanes. You can find the definitions here. To have either hit Western Canada is a rare event. Wikipedia has a list of all hurricanes/typhoons hitting Canada. I've looked at the list and can't find a hurricane from the Western Pacific. Could be wrong. It could be just a definition problem.

Hurricane Ana nearly hit Hawaii just over a week ago. It missed it to the south and then veered north and circled back heading northeast. 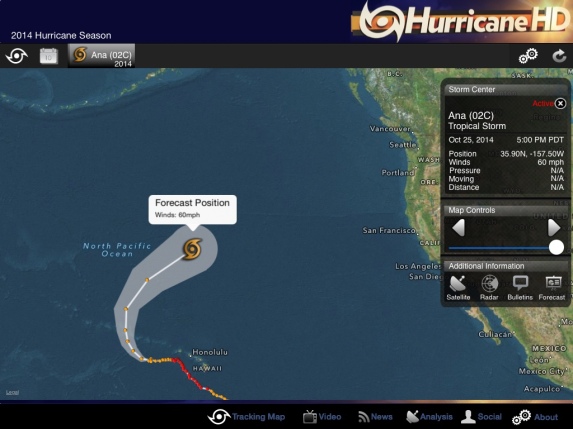 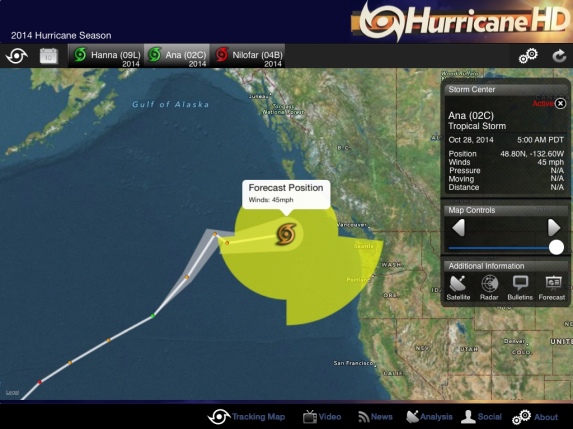 The remnants of Ana will affect both Canada and the State of Washington.

Remember my post just a short time ago about the warmest September on record? Here's the map I used. Look at the Pacific Ocean.

I have no scientific weather experience but my question is–could it happen to Northern California? I will have to answer my question in the affirmative. You have to go back to 1859.

Apparently September is the month to watch with 38 storms impacting California.

Note the word “impact”. It doesn't mean the storm actually hit California. Again you can consult Wikipedia for more information on this. There it says: