A couple of updates on past posts are in order today. Both are good news for me.

The first one is the Curlew Sandpiper I found on the 19th of September. You can read about it here and here. The California Bird Records Committee has acepted the record. It will be the first documented record for Mendocino County.

The second update is–You may recall that I had an email conversation with Ted Floyd, the editor of “Birding” Magazine. That was back in October. I wrote about it here. He encouraged me to submit a letter to the editor for his magazine. I actually expressed some doubts that it would get published and wasn’t totally surprised when it wasn’t in the last issue of “Birding”. So I was surprised when I got this email from Ted.

We’ll be running your letter in the next issue of Birding.

But let’s update something first. You mention your Green Big Year, which was a work in progress when you submitted your letter. But now it’s complete. So could you please update the two yellow-highlighted stretches of text below? Thanks, –Ted Floyd

Rakestraw’s article and Floyd’s blog post referenced Scott Smithson’s article, “The Green Big Day: Less Driving, More Birding,” pp. 46–52 in the July 2012 Birding. I would have to say that Smithson’s “Green Big Day” was the most thought-provoking article I have ever read in Birding. His article inspired me to look at how I bird. I decided I could cut my carbon output by using the local transportation system, using my bike, and using my feet to bird. I did a Green Big Year using these methods. I would up with ### species (no exotics, Ted), added seven new county birds, two of which are lifers, and saved ### carbon-producing automobile miles.

Ted–let’s change that sentence to–“I found 250 species (no exotics, Ted), added eight new county birds, two of which were lifers, and saved over 2929 carbon-producing vehicle miles.”
I like the word “vehicle” because I drive a small truck.
Richard
Ted acknowledged my email.
So once again I will wait for the next issue of “Birding”.

Friday I had to decide if I would do any birding at all. A needed rain storm was coming into the area. My decision was to give it a shot and ride between the rain drops. At Virgin Creek a high tide and a big surf event was occurring. I had a hard time finding any shorebirds on the beach but tracks in the sand showed that they had been there recently. 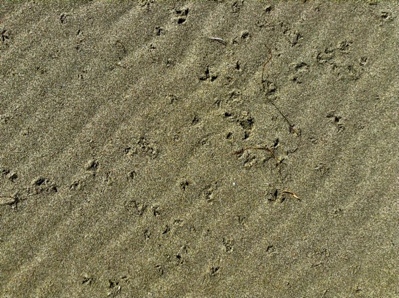 Just a hint here. Some of these tracks could be the Curlew Sandpiper’s.  I don’t know if it was because of the weather or something else but the birding was slow. Have been checking known warbler migrant hot spots that I can get to along the coast and there has been nothing moving.

On the way back to my bus stop I started to get a little wet but it still wasn’t bad. I was able to get home without being soaked. Decided it would be a good time to clean out my gutters and was on the roof for awhile. A little later the phone rang. It was Jerry White. You might remember Jerry from the Northern Parula post. He was at Virgin Creek Beach and he was pretty sure that he had found a Curlew Sandpiper at the creek. My brain lit up like fireworks. In all the activity of the previous two days I had forgotten about the Curlew Sandpiper. I guess that proves one of two things. My short term memory is going or I’m not an “obsessive” birder. I would prefer the “obsessive” birder part of that sentence. I don’t know now long the pictures of the Curlew Sandpiper would have been on my computer before I had the time to process them. Jerry was looking for someone to get pictures of the bird. I told him I might already have them. It would have been too dark by the time I could have gotten to Virgin Creek to take any more. We compared notes on the sandpiper and I posted a notice on MendoBirds, a local bird site, that a Curlew Sandpiper was on Virgin Creek. Several other people that Jerry called were able to get down to Virgin Creek before dark to see it. The sandpiper was last seen on Saturday, the 21st.

Curlew Sandpipers are a California review bird. This means that the California Bird Records Committee (CBRC) made up of known top birders (we call them the birding gods) in California have to review pictures and descriptions of the birds before it’s accepted into the official California Records. This irritates some birders who don’t want to have their sightings questioned and the committee isn’t known for their speed in doing their reviews. I submitted my paperwork and pictures on Saturday (21st) and a short time later received an email from Joseph Morlan, President of Western Field Ornithologists (WFO), stating that he had posted my picture of the Curlew Sandpiper on their website. Unfortunately a better picture bumped mine. Bummer!! This is the type of rare bird that causes birders to travel many miles to see. Already there are reports of out of area birders seeing the sandpiper.

The Curlew Sandpiper has never been reported in Mendocino County. If this record holds up, it will be a big deal for me. It will be a life bird, a Mendocino first sighting record and a “green” bird year record.

I’m creating a pattern. Every time I have to gas up and run errands in town I walk 10 Mile Beach. I went 50 days between fill ups this time. 56 is my record but 50 is still well above average. I got to Ward Ave a little after 8:00AM. On the rocks just to the south I found 2 first year Red Knots. They were actually a little friendly, a trait I find in many first year birds. This was the first time that I’ve found 2 together. All of my sightings of Red Knots have been single birds. I love the pressed aluminum effect of the feathers on their backs. 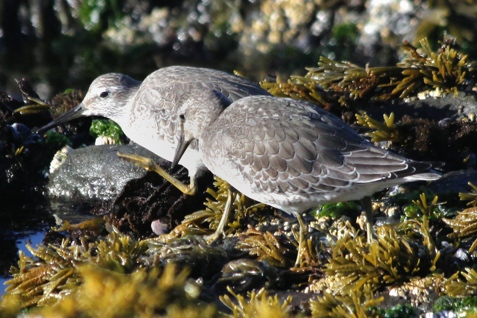 These 2 birds were with a flock of Surfbirds and a few Black Turnstones. I have not seen many Surfbirds yet this year. Moving north on the beach and just about even with the end of the of the Haul Rd. I came upon a Black Turnstone and a very “bright” shorebird larger then a peep. Moving closer I noticed that it had a downcurved bill much like a Dunlin but I’ve seen many Dunlin and I knew it wasn’t one. I noticed it’s long black legs and that it was only a little smaller than the Black Turnstone and maybe taller.

A closer look at the bird. 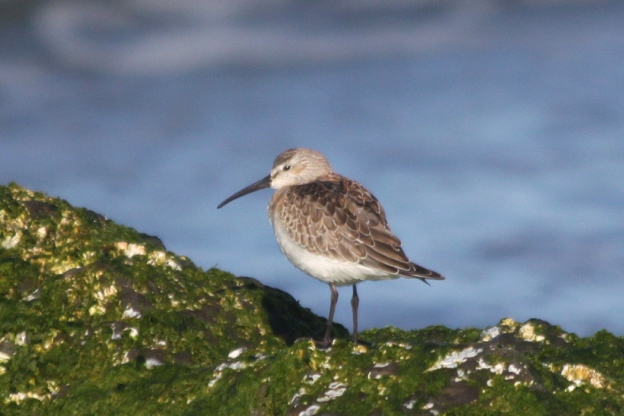 After about four pictures the sandpiper joined a flock of shorebirds flying south. I pondered what it was. I checked the Sibley Bird App on my Itouch. As I continued my walk north on the beach I began to think that I had seen a Curlew Sandpiper but I had not seen the diagnostic white rump. A later review of one of the pictures revealed it’s white rump peeking through it’s wings.

According to “Rare Birds of California” a book by the California Bird Records Committee (CBRC), Curlew Sandpipers, “breeds across arctic Siberia, casually in Norther Alaska.The species winters widely in the Old World, as far north as the British Isles but mostly along tropical and subtropical coasts from sub-Saharan Africa through southern Asia to Australia.” “Since 1971 records have averaged nearly one per year…” Obviously this is one rare bird.

I continued my walk north finding a Pectoral Sandpiper not too much further and then a pair of Baird’s Sandpipers after that. A pair of Baird’s Sandpipers have been on Ten Mile Beach for over 4 weeks. Further still I came upon a banded Snowy Plover that looked injured. I took some pictures. It was limping badly holding one foot up. I call Becky Bowen of SOS and reported it and continued north. Sometime later at Ten Mile River I realized that I had messages on my phone. Service is spotty out there. I called Becky and she said that there was a team of State Parks people working on the Haul Rd. project and that Adam Hutchins had been sent to find and assess the plover. It might be helpful if I could meet him and point out the location which is what I did. He needed is binoculars from his truck so I plover sat for a while keeping one eye on the plover and one eye looking for Blue-footed Boobies that have been invading the California Coast. Adam assessed the plover and with the help of my pictures determined that one of the bands was partially off and pinching the joint between the foot and leg. He made plans to come back the next day for another look. I told him I would download the pictures of the plover and email them. Before I left I told him about the Curlew Sandpiper and I think he was impressed.

UPDATE: Good news. I received word from Adam the next day that the band had come off and the Snowy Plover was using the leg normally.